Boyhood Dream is Realized in Beautiful Lodge Near Cable
— reprinted from an article as it appeared in the October 6, 1932 Ashland Daily Press 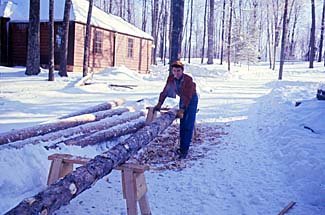 A boyhood dream, pondered by a ten-year-old lad who was just starting a career which led to the heights, has taken shape on Lake Namakagon in a paradoxical summer home equipped for, and occupied, the year round.

Loeb Lodge, a 70-acre estate nestling along the shores of the winding lake, its entrance hidden by a steep, comparatively uninviting descent from County Trunk “D” in southern Bayfield county, but a wonderful establishment when the “private” sign at the gate has been dared, presents to the visitor a dream come true, the dream of Jacob M. Loeb, retired Chicagoan who retains his interest in business but has turned to out-naturing nature as he seeks the peace and quiet of the northwoods. 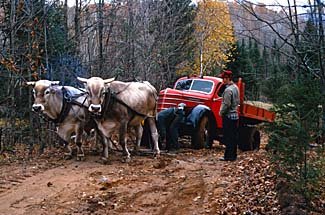 Splendor upon splendor unfolds before the eyes of the visitor as he enters the intriguing estate until finally he becomes so surfeited he is able only to repeat, over and over, “beautiful, gorgeous, magnificent.”

As with a great panorama, majestic in its beauty and almost terrifying in its immensity, the onlooker is unable to grasp immediately the glory of the vistas which unfold as he wanders over the establishment, stands speechless at the great windows which open from the main room over the lake, glimpsed 40 feet below through a curtain of foliage, as his eyes travel from the nearby trees to the length of lake channel, barely visible as it winds through the peninsulas which make Namakagon seem a succession of small lakes rather than a great body of water.

As the visitor reaches the end of the steep descent from the highway he sees a brown building, near the water and with a beautiful background of verdure, the foreground almost entirely monopolized by a great bridge. He thinks to himself, “What a fine place,” and prepares for another of the resorts which dot the lake country. 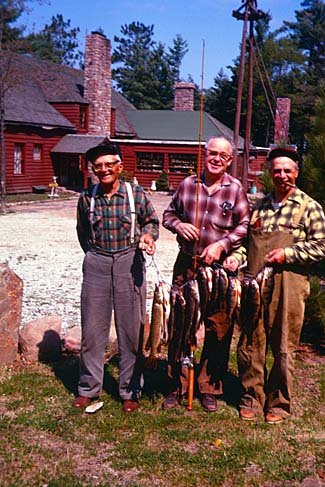 But the car in which he is riding gathers speed as it crosses the bridge with the driver apparently intent upon crashing into what appears to be a wall with stone and cement alternating. As the “wall” nears, it is found to be a roadway, concreted in part but with the cobblestone treads to give the tires of the car a purchase as the machine climbs.

The car tilts. It continues to tilt. The motor pulls and slows. The machine climbs and the crest is reached, revealing a two-acre estate of improved, heavily wooded land, dotted with what Mr. Loeb calls “cottages” but which appear to be almost mansions.

As the car circles to the doors of the central building, Loeb Lodge itself, a pair of Scotties dash from the shrubbery, barking at its occupants. Other Scotties pursue their own devious ways and later Mr. Loeb explains that he breeds the dogs for his friends and as a pastime. All of the Scotties, 11 on the grounds at the present time, are pedigreed.

“Be with you in a minute,” the owner of the lodge calls as the visitors leave their machine, and they proceed into the spacious main room of the lodge.

Massive fireplaces, made entirely of native stone, appear to have been constructed almost with abandon.  Huge towering chimneys climb above the lodge on all sides, and each, the visitor finds, is capable of taking monster logs, almost as large as those which in lumbering days were skidded into the lake which the lodge overlooks. 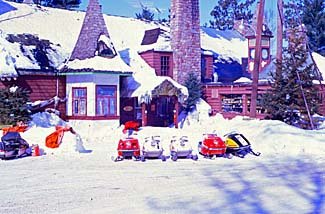 But as the visitor enters the great room of the lodge he is lost in wonder at the glorious magnificence of the place.
Great studio windows, towering fully twenty feet, give an uninterrupted view of the beautiful vista of the lake and the channel, reaching almost as far as the eye can reach. Towering trees dot the terraced precipice which falls to the lake immediately before the windows, affording a semi-curtain for the view, making it even more intriguing.

A long table, easy chairs so comfortable “it is almost painful to be polite” as one of the party was heard to remark as the ladies of the household entered, and a grand piano adequately fill the room while giving an impression of unimpeded spaciousness.

Turning from the windows, almost with pain that such a gorgeous view must be interrupted, the visitor observes two of the massive places and, along the side of the room away from the lake, and the windows, a gallery, with reading alcoves offering a tempting lure.
A few minutes’ chat with the genial host and “Come on, let’s look over the place.” 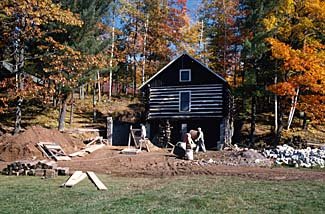 Mr. Loeb takes the visitor first into his palatial bedroom with its own fireplaces, its private bath, and its dressing room and wardrobe. French windows open onto a private porch, also overlooking the lake.

Then Miss Merritt, his secretary, escorts the party to the gallery, extending the full length of the lodge. She displays the library, a great room completely lined with worthwhile books.

Bedrooms, large or larger than those in the ordinary house, line the gallery corridor in both wings of the building, and a gentle, cool breeze comes through an open window, causing one of the party to remark, “Put a guest from the city here and this would become a lethal chamber, for he would be dead to the world as soon as his head hit the pillow.”

An apparent library, also containing a great fireplace, causes Miss Merritt to explain “These are books not yet catalogued or not worthy.”
The tour of the gallery and second floor completed, the visitors again descend to the main room where Mr. Loeb takes them in tow.

He leads the way to the full basement, displaying a pantry containing almost as much canned goods as is carried in stock by the ordinary small grocery. “We have to be prepared for the winter,” he explains, “and we lay in a complete stock because we never can tell when a blizzard may cut us off for days.”
The party passes a great furnace.

“This place was a boyhood dream,” Mr. Loeb explains. “I’ve always dreamed of a place like this and now I’ve got it. I’m going to die here.”
He informs his guests the building is heated by steam “and last winter we took out three
radiators because it was too warm.” 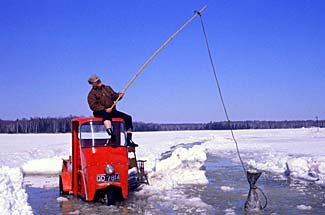 “Here’s my pride,” he asserts, opening what appears to be an icebox door. A large room is disclosed in which the temperature, even on a hot day, is so low as to be almost uncomfortable. “This refrigerator was made by the best icebox maker in the state,” Mr. Loeb declares, explaining that John Beck of Ashland created it. “There are forty cakes of ice above it and still it is so dry we store fresh vegetables and fruit side by side and they’ll never absorb the odor of the other.”

The tour of the great basement ended, Mr. Loeb leads the way to the kitchen where, with a background of a large electric refrigerator, the cook and an assistant are preparing the evening meal.

Outside, and Mr. Loeb begins an exposition of his favorite hobby, the preservation of native trees and the importation of others.
For four years, he explains, Davy tree surgeons spent summers at Loeb Lodge, ministering to monarchs of the forest, split, broken, and dying following the retirement of the lumbering man. One tree, a towering maple, has a solid core of concrete extending five feet beneath the ground and fully fifteen feet into the air.

Silver maples, the rare Norwegian maples, native trees of all kinds for “I have saved every possible native tree,” and almost innumerable other varieties of trees dot the beautifully kept green lawn, but the crowning glory is a wonderful blue spruce, planted two years ago, which has grown more than two feet since it first was rooted in northern Wisconsin.

A comment on the beauty of the wood in the lodge brings the explanation “All native wood, and there’s not a grain of plaster in the place. It’s just as warm in winter as it’s cool in summer because it’s fully insulated. We use to have our own power plant and we still have an auxiliary plant, but we buy our electricity from your power company and we’ve only had a couple of interruptions of service.

We get the water for the Lodge and the cottages, my daughter’s on one side and my son’s on the other, from two 90-foot wells but it is too cold for the grass so we pump water for the lawn from the lake.”

A glimpse, as the party walks along the terraced precipice of a walk near the level of the lake, brings the explanation “Our board walk, eight laps to the mile, so we have no excuse for not getting our exercise.”

“The shop and servants’ quarters,” Mr. Loeb answers when asked about buildings seen among the trees back of the main lodge, and as the group re-enters the lodge itself, “You know, I wanted to have that balcony go all the way around, but my son-in-law, an architect, talked me out of it and now I wish I’d done it my way.”

The visitors, under the impression they have been at the lodge only a few minutes, find they have spent more than two hours and it becomes necessary to leave. They thank their host, with the private belief they cannot fully voice their appreciation of the opportunity to inspect the lodge, and leave, confident that at last they have seen a castle in the air come true.

Loeb Lodge once was a dream. Now it is a dream come true, but if the oft-repeated assertion is true that “anticipation is better than realization,” the visitor is certain that the dreamer who made his dream come true must have had a life unequalled in the record of man for enjoyment and pleasure.