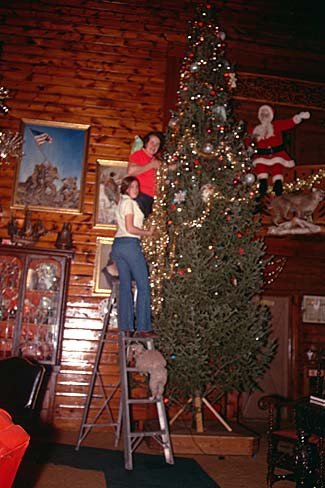 The 1880’s Lumber Industry was a major part of the northwoods of Wisconsin. After cutting the timber, the lumber companies would seek out buyers and sell off the land. In 1904, Ernest and Leola Lieberman opened the first commercial resort on Lake Namakagon, a 3,200 acre pristine glacial lake.

The resort and cabins were located on the area which is now the boat landing and beach. The balance of the land was owned by Frank Waldon, who sold it to the Loeb family.

In 1927, Jacob Loeb constructed over 12 buildings for his family retreat. This included the Main House, which is Garmisch Inn today.

Read A Newspaper Article that appeared on October 6, 1932 in Ashland Daily Press, “Boyhood Dream is Realized in Beautiful Lodge Near Cable.”

In 1952, the Ben Rubin family from Minneapolis, Minnesota purchased the Loeb estate; a few years later it was sold to the Sumrall family.

In 1956, the Funk family from Chicago, Illinois, purchased the resort. They named it Garmisch, USA for its German namesake Garmisch-Partenkirchen, a resort town located in Bavaria, southern Germany. Jean Funk was responsible for the wrap-around windows in the Dining Room and addition of the Bierstube. She also added the Blarney Castle in 1965.

In the winter of 1988 a couple from Bismarck, North Dakota, Bruce and Shelby Niebergall, purchased the resort after it had been closed to the public for a number of years. It was in great need of repair. In 18 years they worked diligently to restore and improve the resort, making additions to the number of cabins and redesigning the Dining Room and Bierstube.

In April of 2004 the Garmisch Inn was purchased by Dennis and Kathy Howard and family from Middleton, Wisconsin. Being long-time residents on the lake and having visited Garmisch many times, they chose to become part of the legend that is Garmisch, USA. They have added their special touches to the lodge and grounds to make Garmisch the beautiful resort you see today, and will continue to make improvements for all who come to visit

Enjoy Your Time with Us!
Dennis & Kathy Howard and Family